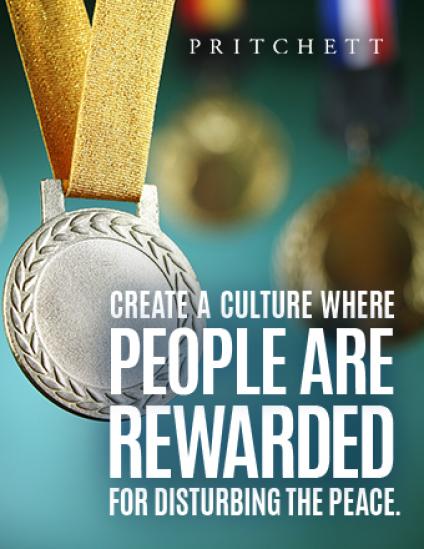 Create A Culture Where People Are Rewarded For Disturbing The Peace

Change, by its very nature, is destructive. It gets messy. It causes confusion. That bothers a lot of people. They warn against change, or argue for taking it slow and easy so nothing gets broken. If they get their way, the organization has to tiptoe around, try to be neat, and not hurt anybody or upset people. Eventually, such a culture gets the organization in big trouble.

A culture that’s unwilling to break things can’t move fast. If it tries to salvage everything, it ends up carrying a lot of old baggage. Bureaucratic practices and all kinds of other bad habits build up over time. Even beloved tradition can anchor the organization to its past, making it tough to respond to the pull of the future. Protecting what “is” often sabotages what “could be.”

It may sound strange, but destruction is one of today’s conditions for survival. Just as a snake sheds a skin it has outgrown, the culture needs to rid itself of habits that have outlived their usefulness.

Help do away with bureaucratic practices that get in the way. Break with tradition when it becomes an obstacle. Don’t be afraid to butcher the sacred cows. Instead of blindly protecting old beliefs, throw them against the rocks of reality to see if they bounce or shatter. Be willing to smash some glass.

Sure, all this gets messy. It makes a lot of noise. Some people will get upset. But organizations—and individuals—always must make certain sacrifices if they want to stay strong.

Help create a culture where people are rewarded for disturbing the peace.

“If evolution was worth its salt, by now it should’ve evolved something better than survival of the fittest.”      —Jane Wagner