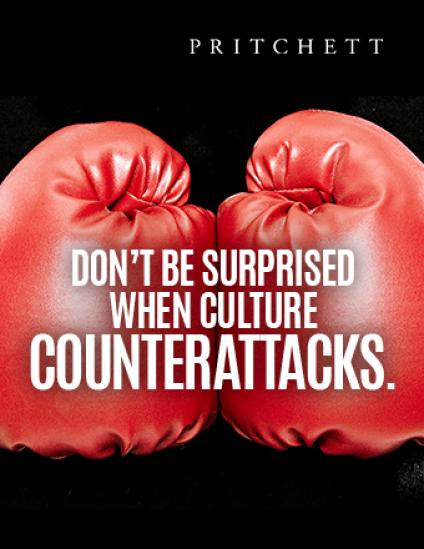 Don't Be Surprised When Culture Counterattacks

As far as corporate culture is concerned, “change” is the dirtiest word in the dictionary.

It’s culture’s nature to believe deeply in itself, and it shows absolutely no sense of humor when people attempt to redesign it.

In Culture Matters: How Values Shape Human Progress, Harrison and Huntington discuss how difficult it is to find something that “can substitute for disaster in stimulating cultural change.”

You’re dealing with a self-righteous, heavy-handed adversary. Don’t expect it to fight fair.

Culture’s overriding priority is to protect itself. This is more than a habit—it’s buried deep within culture’s DNA.

Let’s look at how this plays out when management decides to reshape the existing cultural framework.

Instead of riding off peacefully into the sunset, culture always launches a fight for survival. The battle begins with the existing culture insisting on its right to set the rules for change. This is a trap, of course, but companies fall into it all the time. Here’s the hard reality—almost always you have to violate the old culture in the process of changing it. But the old cultural establishment is moralistic and bossy in dictating which company behaviors are acceptable or off limits vis-à-vis the approach to be employed in the makeover. The existing culture blesses the people who try to protect it. And it tries hardest to punish or discredit those who represent the biggest threat to its kingdom.

So here’s the way to look at it. When the existing culture gets riled up and starts to fight back, that’s a good sign. Don’t let it slow things down. You’re probably making some real progress, so keep the pressure on. That’s the only way the company can achieve “escape velocity” from the old culture.