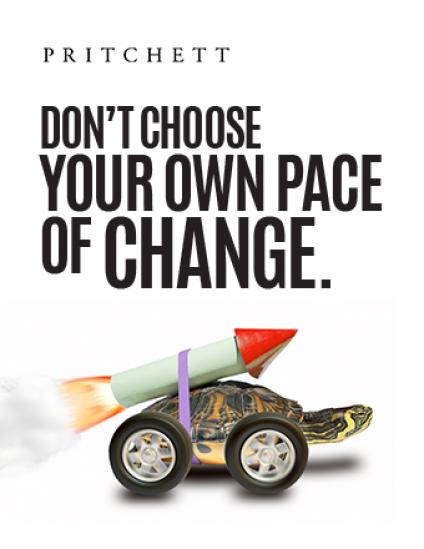 Don't Choose Your Own Pace of Change

Some people fully intend to accept change, they just want to adapt according to their own schedule.

These folks cooperate . . . up to a point. They really don’t mean to resist change, but they do want to stay in their comfort zone. Their plan is to minimize stress by “pacing themselves.”

This behavior is based on several faulty assumptions.

First of all, let’s examine the mistake that comes in assuming we’ll feel less stress if we move slowly to change. Sure, we might—but not if we’re falling further behind with every day that passes. Not if our employer starts putting more heat on us because we’re bogging down the rest of the organization.

Still another wrong assumption is in thinking we have the privilege of choosing almost any rate of change that “feels right” personally. Frankly, the organization can’t give its blessing to that kind of behavior. Some people, given their preference, would take forever to adapt.

We can call ourselves cooperative. We can even give ourselves credit for not deliberately resisting change. But our thinking is badly off key, and we’re headed for trouble, if we’re not changing as fast as the world around us.

The simple fact is that failure to keep up with the organization’s rate of change is resistance. Intent is not the issue here. Impact is. We might be innocent so far as our motives are concerned, but we’re guilty of resisting change whenever we slow things down. We also create tension between ourselves and the rest of the organization.

Keep in step with the organization’s intended rate of change.

March to the cadence that’s being called by the people in charge, instead of allowing yourself to take whatever amount of time you want or feel you need.

Don’t lag behind—there’s little chance a lull will come along and give you a chance to play catch-up.