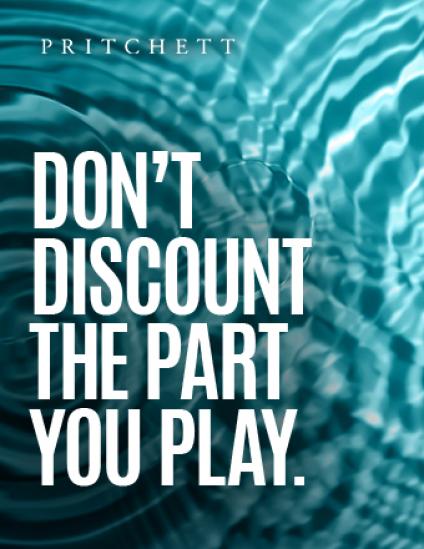 Don't Discount The Part You Play

Edward Lorenz, a meteorologist at the Massachusetts Institute of Technology, wrote about it in a paper which raised the question, “Does the flutter of a butterfly’s wings in Brazil set off a tornado in Texas?”

His point: Small acts can have huge consequences.

As it relates to culture, the butterfly effect implies the far-reaching power that might be possible from a single employee’s behavior.

Everyone in the organization leaves their fingerprints on the culture. Sure, some people shape it more than others, whether because of their position or as a result of the raw power of their personality. But each person carries influence. Even if you wish to “check out” and not get involved, you really can’t. It’s impossible to sit on the sidelines in the culture game.

So here’s the question: Are your actions and attitudes helping the culture shift in the right direction, or could you be an obstacle to change?

Your impact may be subtle. And you may feel insignificant in the overall scheme of the company’s culture. But don’t discount the part you can play here.

Culture is like a very large, complex portrait that emerges out of all kinds of brushstrokes. Some are bold and deliberate. Others are softly nuanced and may seem inconsequential. But everyone in the organization carries a brush. And we each add our own touches of color. What’s important is for you to make a conscious effort in what you personally add to the cultural canvas.

History shows us that, much of the time, cultures actually aren’t changed from the top. The shifts often are driven from people at the lower or middle levels. It takes a swarm of collective effort—many efforts from many people—to move culture to a new place.