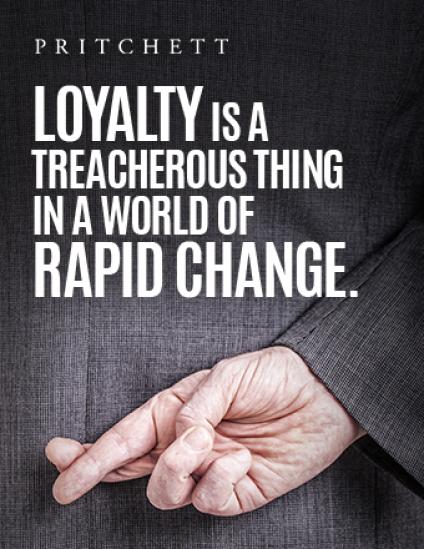 Loyalty Is A Treacherous Thing In A World Of Rapid Change

Be wary of people who take pride in being “loyal” employees. Loyalty is a treacherous thing in a world of rapid change. You need to examine the object of people’s loyalty. Analyze their actions as well as their motives. Then determine whether this is the kind of “virtue” the organization can afford.

Loyalty to the organization has value, assuming it gets demonstrated in the proper manner. Loyalty to the culture, on the other hand, can present a variety of serious problems. Many companies are in trouble because people are defending an outdated culture instead of looking out for the organization itself. They’re not changing their values, priorities, beliefs, and behaviors in order to make the outfit stronger and more competitive for these changing times. Instead, they’re busy trying to perpetuate a culture that’s killing the company.

Some employees are innocent at heart. They become company traitors by default, letting their commitment to the old culture blind them to the desperate need for change. These are the people whose hero worship has them emulating old role models that are wrong for today. The accidental traitors haven’t realized that some of the traditions and values they still hold precious now interfere. By not uncoupling from old, established cultural habits in how business gets carried out, they’ve become enemies of the organization.

Other so-called loyalists are not so guileless. They use loyalty as a cover up for more devious, selfserving acts. It shouldn’t come as a surprise. “I’m only being loyal to the culture” makes a great hiding place for resistance to change. People who feel threatened, or those who clearly stand to lose in all the upheaval, don’t mind fighting a little dirty to keep things the way they are. These are the deliberate traitors.

Sometimes you have a tough time distinguishing between the two types of loyalists. It helps if you can, though, because they deserve different treatment. The accidental traitors might be turned by education. Or persuasion. But you handle the deliberate traitors best by first exposing their behavior for what it is, and then drawing a line in the sand. Make it clear that if they step over that line with more of their manipulative behavior, they will feel the sting of sanctions. Then make your words stick.

The bottom line on all this, of course, is that loyalty isn’t everything it’s been cracked up to be. You’re better off with aloyalty to the culture, because it needs to be a moving target, constantly changing to keep up with the outside world.