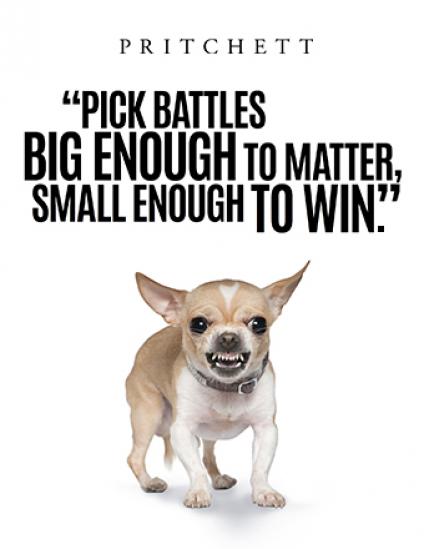 People going through organizational change often end up with a bad case of battle fatigue.

Some wear themselves out waging war on too many fronts. These are the crusaders in the anti-change crowd, the ones who oppose almost every move the organization makes toward doing things differently. They’re always bucking the odds, even fighting for things that actually wouldn’t be in their best interests if they managed to get their way. Sooner or later, these nay-sayers end up across the battlefield from the boss, at odds with a person they need as their ally.

Others waste too much emotional energy fighting over trivial issues. They blow things out of proportion, giving major attention to minor problems. For these people, practically no issue is too small that it deserves to be ignored.

Finally, we find the folks who set themselves up for stress and failure by pursuing a lost cause. These are the employees who are determined to “defend the undefendable.” They throw themselves across the tracks in a hopeless attempt to stop the freight train of reality. You’ll see them arguing against decisions that are irreversible. Or lining up on the losing side where there’s no hope of winning.

All this behavior requires enormous amounts of emotional labor. But in spite of all the effort, the end result is more likely to be personal damage than any psychic relief or satisfaction.

Pick the wrong battles, and you put yourself on a sure road to burnout.

“If you are losing a tug-of-war with a tiger, give him the rope before he gets to your arm. You can always buy a new rope.” —Max Gunther