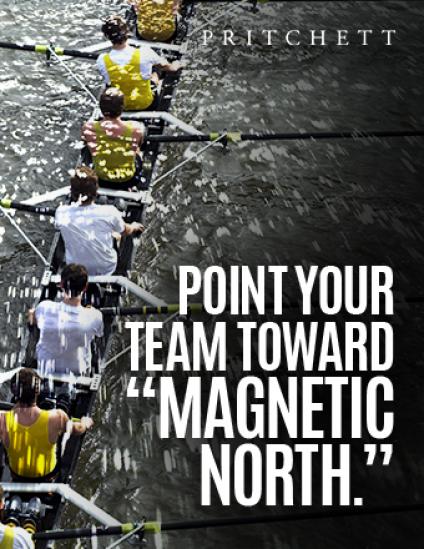 Point Your Team Toward "Magnetic North"

Teams need to know where they’re going. The players perform best when they unite with a keen sense of mission, knowing they’re headed somewhere special. If the aiming point is clear and the “vision” is compelling, it draws the people together and pulls them forward.

The dream serves as magnetic north, swinging the needle of the group’s attention away from the demoralizing aspects of “now” to the inspiration of “what could be.” For teams mired in an unpleasing present, fearing a bleak future, or clinging to the past, this mental shift is critical. Forward movement comes easiest when people are attracted to what they’re moving toward.

Point your people in the direction of magnetic north—give them a “promised land”—and you raise their sights above the grim routine of the day-to-day grind. Offer something besides a salary to sustain them through the trials of change, something that touches them deep within and justifies the struggle. A shared vision can engage the heart . . . fire commitment . . . glue the group together.

In defining magnetic north for your team, concentrate on making it a cause. People get fired up about crusades, but not about “strategic plans.” A vision is more like a movement than like a dry set of corporate financial objectives.

Paint your team’s “promised land” in vivid color. Use bold strokes. Make it an image with enough magnetic pull to grab everyone’s attention and compelling enough to overpower resistance to change. Then keep holding the picture up for your people to see. Promote the vision constantly. Keep it alive in their minds.

Your work group must have a purpose if it is to move purposefully. Without one, individuals drift, go their separate ways, lose sight of the logic behind collective effort. Without a vision of something better to shoot for, hope fades. People start thinking, “This is it . . . this is as good as it’s gonna get,” not realizing that they are viewing the future from a trough instead of a mountaintop.

Use your imagination. Get creative. Come up with something dramatic enough to stir the souls of your people. Even if it has to be short-range, they need a sense of mission that serves them all as a common aiming point for their efforts.

Any group or subgroup, however small, is free to draw up a vision that represents its own magnetic north. Ideally, smaller units will synchronize theirs with that of the parent organization, but they also can proceed independently if the parent has left a void in this respect. Don’t put this task on the back burner even if higher management hasn’t told you what to shoot for. You may never get clear signals from them.

You’re trying to reconstruct a team, mobilize a coherent and dynamic group effort, and your people need a mission they can get passionate about. So take the initiative. Give them a sense of purpose that captures their imagination and encourages them to close ranks. Team reconstruction accelerates dramatically when the members buy in to the dream and move together toward magnetic north.