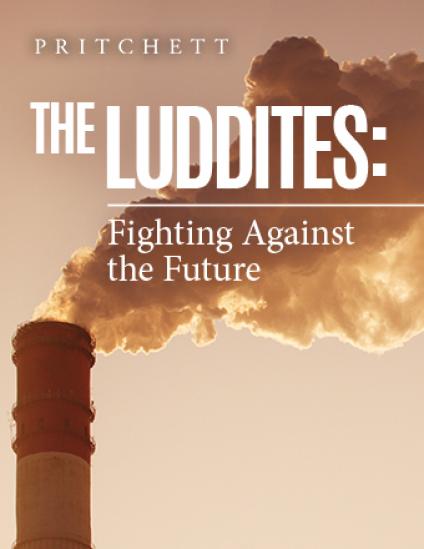 The Luddites: Fighting Against the Future

Early in the 1800s textile mills first began to appear in England. The wool-finishing machines inside these early factories were seen as high-tech wonders at the time. Each piece of equipment could easily produce as much output as four or five people working as “croppers.” The job could be done quicker, cheaper, and, in some ways, better by the new tools.

The mills soon began to replace the traditional cottage culture made up of weavers, combers, and dressers of wool. This was downsizing, 19th century style.

For hundreds of years these people had worked out of their homes or in small village shops. They made a living using machines that could be run by a single person, sometimes with the help of children. Seeing their jobs eliminated by the new Industrial Society, they revolted.

In an effort to protect their careers and communities, they began a campaign of sabotage against the woolen mills.

These people who were being displaced by new technology banded together for night attacks on the factories. Calling themselves “Luddites,” after a mythical leader by the name of “General Ned Ludd,” they broke into the mills and tried to destroy the hated new machines.

For some fifteen months these raiding parties waged their personal war against technological advancement. Finally, the movement was subdued by the authorities. The Luddites could not stop the sweep of progress. The power of consumer preference for better products and cheaper prices won out, as usual.

About all the Luddites accomplished was to make a name for themselves in history as defenders of the status quo. As opponents of progress. Today—two centuries later—the term “Luddite” is still used to describe someone who fails to see the futility and self-destructive nature of fighting against the future.