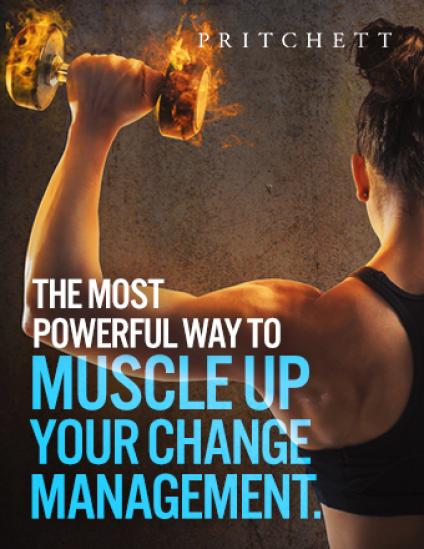 The Most Powerful Way to Muscle Up Your Change Management

Want to know the #1 reason why change management projects bog down? Or why so many eventually fail?

Here’s the dirty little secret: communication failure. The problem is hiding in plain view. And that’s probably why companies don’t catch on. “Communication failure” sounds so boring. So mundane. But you need to look at it this way—communication is the oxygen for change. It’s how we get things done…or not. If your messaging approach lacks muscle, your change efforts will cripple along or even die.

Now for a second secret: Communication is failing because organizations still rely on the old-school, 20th century messaging style. Stop and think about it.

Bottom line, has your change management communication changed as much as the world has changed?

If not, you’re probably just adding to the noise level, wasting time and money while failing to get through to your people.

So many of the generic problems that develop during organizational change are rooted in misunderstanding. Your people don’t pay attention, they aren’t properly informed, or they aren’t persuaded. This adds significant risks.

These red flags are symptomatic of weak communication practices, and they get expensive.

Let’s also respect the fact that it’s more difficult to communicate effectively during organizational change. People become preoccupied with their “me issues.” They get jumpy and start to sweat—you can almost smell the fear. Sometimes anger crackles through the air . . . and some people tune out with an “I don’t give a damn” attitude.

Change also triggers more information flow, making it harder for your message to get through. Email traffic increases. The rumor mill hits high gear. Plus there are more meetings, reports, inquiries, etc., for people to deal with.

You really have to raise your game to communicate effectively. Conventional practices simply don’t have the muscle for the high-priority messaging that’s needed in support of major change initiatives.

YOU CAN BECOME A CHANGE MANAGEMENT SUPERHERO!

What kind of messaging grabs your attention and sticks in your mind? No doubt it’s very different from the typical “corporatespeak” you see in conventional company communication. Muscle up your change management messaging by following these design principles: