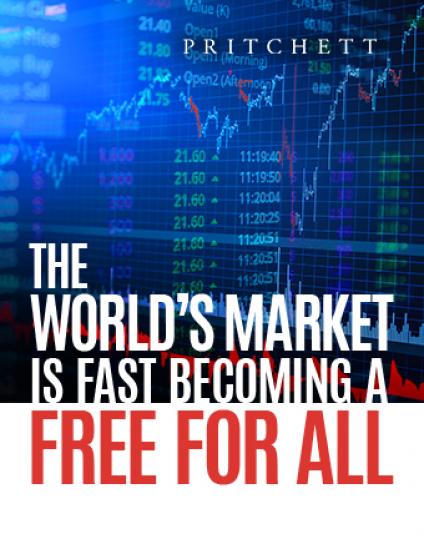 The World's Market Is Fast Becoming a Free For All

By comparison, the technology of today’s Information Age gives us computerized brains and electronic speed. Work is becoming still less physical and more mental . . . we do less with our hands and more with our heads. The trend is toward “smart tools,” instruments, and equipment that contain microprocessor intelligence.

You’ve got this stuff all over your house. It’s the laptop. GPS. Smartphone. Digital camera. Microwave. HDTV. The car parked in your garage probably carries more computer power than the first lunar landing module.

This high-tech equipment has a mind of its own, and we have to use our minds more to work with it. So thinking skills are becoming more important than motor skills. Knowledge is needed more than muscles. We’re working less with “things” and more with information—like ideas, concepts, formulas, and other data.

In fact, “things” are increasingly being made by other “things,” rather than by people. Robots are making cars. Computers are running assembly lines.

Intelligent equipment also performs many personal services for you on a daily basis. It answers your phone. Digitally records your favorite TV show while you’re away on a trip. Guards your house while you’re gone. Gives you cash so you 15 don’t have to go to the bank. This is just a tiny example of the everyday power of information technology.

Together, computers and modern telecommunications are reshaping the world of work. Because information is the “raw material” of so many jobs today—and because it can travel so cheaply to anywhere on the planet at the speed of light—where work gets done becomes quite optional. With a laptop computer, cell phone, wi-fi connection, and the like, you could work at home, at the beach, or in your car as easily as at the office. We don’t have to go to work . . . it can come to us.

This ability to work remote means we’ll enjoy much more job freedom. But it also means businesses can go almost anywhere on earth to employ people with the best skills at the lowest wages. So, as employees, we now personally compete with people all over the world for our jobs. It’s our skills against theirs. And many of these competent folks from other countries will give us a run for our money.

Already companies are setting up engineering groups in Moscow that can be managed electronically fromany city in the U.S. Why not? As economist Lester Thurow points out, they can hire an American with a Ph.D. in physics for $75,000 per year . . . or a Nobel Prize–winning Russian physicist in the old USSR for $100 per month. Need computer programmers? You can pay the going wage where you live, or shop around in places like India and Panama. People there have excellent skills, and will work longer hours for a lot less money.

The same situation holds true for low-skill work. Should a company pay a wage premium just to have it done in the U.S.? Or is it better business to send the work overseas, hiring foreigners who actually might be better educated but cost far less than the average American high school graduate?

As consumers, you and I don’t do much checking to find out where the product or service we’re buying comes from. In fact, we don’t even care if the job is done by some high-tech equipment rather than by human beings. Again, we’re just shopping for the best deal.

As a result, the world’s marketplace is fast becoming a free-for-all. Competition is heating up everywhere, forcing organizations to change the way they operate. And forcing us as individuals to get with the program too.