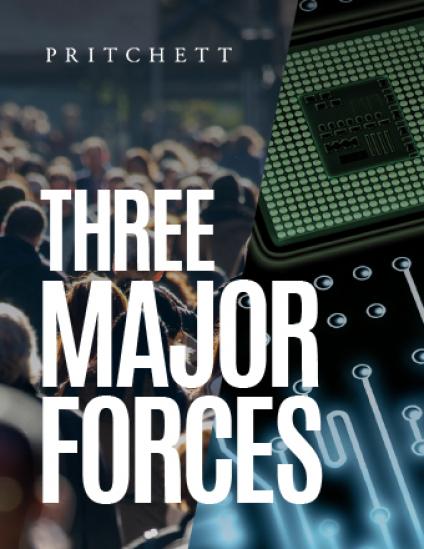 We could identify a wide range of factors that are reshaping our world and the way we live. But let’s focus on three major forces.

Here's the most obvious reason why we’ll see an even faster rate of change in the years to come: Mother Earth is producing a lot more people. And people cause change. Like, they make stuff. They come up with new ideas. They compete for scarce resources. Whatever sorts of things people do, we’ll see happening more and faster.

Some hard statistics will help make the point. Human beings have been around for maybe 7,000,000 years, but the population of our planet didn’t reach a billion until the early 1860’s, about the time of the Civil War. Within the short span of a mere 75 years, though, the head count doubled, to two billion.

Then, by 1975 it doubled again, to four billion—this time in only 40 years. Today we’re closing in on six billion, with U.S. Census statistics predicting a world population of ten billion by the year 2040.

Since technology is a product of the human race, we can expect the rate of technological change to follow the trends in population growth. And that is precisely what’s been going on.

It is said that well over 80% of the world’s technological advances have occurred since 1900. With still more people to come—and also because technology actually feeds on itself—a rapidly accelerating rate of technological change is basically guaranteed.

Get this. There was more information produced in the 30 years between 1965 and 1995 than was produced in the entire 5,000-year period from 3000 B.C. to 1965. Word has it that the amount of information available in the world is doubling every five years. Plus, all this knowledge and information is becoming available to many more people than it ever reached before.

So look out! If “change” and “stress” are connected—and they are—life isn’t going to get any easier.