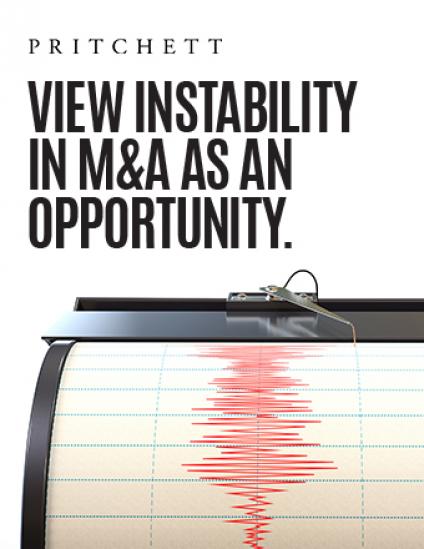 View Instability In M&A As An Opportunity

When it comes to categorizing organizational change, mergers stand as the seismic event. Nothing else even comes close. Not even bankruptcy.

Unlike piece-meal change, mergers have it all. Consolidation requires a restructuring of sorts. Redundancies lead to downsizing. Cultures clash. Systems and processes must be reworked and reconciled. Policies and procedures get revamped. The product line can double overnight. The whole power structure gets re-negotiated.

All this (and more) takes place simultaneously, and all in the white-hot glare of the public eye. Everybody’s watching—Wall Street, shareholders, suppliers, customers, competitors, employees, and the media. How’s that for real pressure?

Mergers shatter the status quo. Soon the entire organization seems off balance. Before long the destabilization begins to eat on people big time, and management worries that the place is going to overdose on change.

What do your instincts tell you to do?

The most common reaction from managers and executives is both wrong and rather fruitless. They feel compelled to stabilize things. Their natural tendency is to try and manage change into submission, to make the situation settle down. Managing, in their eyes, is about being in control, and these circumstances give them the feeling that they’re losing their grip. So they try to muscle the merger toward stability.

But now is a time to respect your limits. This thing is bigger than you. For the time being, you’re not going to be very successful at bringing stability to the organization. You can waste enormous amounts of energy seeking organizational homeostasis, when, in fact, the destabilization can be turned to your advantage.

During the early months of merger integration, about the best you can do is manage the blur—ride the waves, so to speak, instead of trying to be boss of the ocean. You can’t avoid the rough water, so you might as well make the most of it. The ride may be wild and scary, but you sure can cover some miles.

Believe it or not, there is a blessing in all this. Several in fact. With things in such a state of flux, you have a window of opportunity during which you can do dramatic things. It’s like having a license to make wholesale changes, to take actions that are long overdue.

People are primed for it. The energy level is up. So pull the trigger. Don’t squander this chance to do more than merely merge.

This major uptick in corporate metabolism is something you desperately need to sustain. Rather than being disturbed about it, you should nurture it. The organization needs it to compete. And as for the intense instability, you should use it to develop a higher tolerance for disorder on the part of your people. That, too, has become an essential survival skill in this world of high-velocity change.