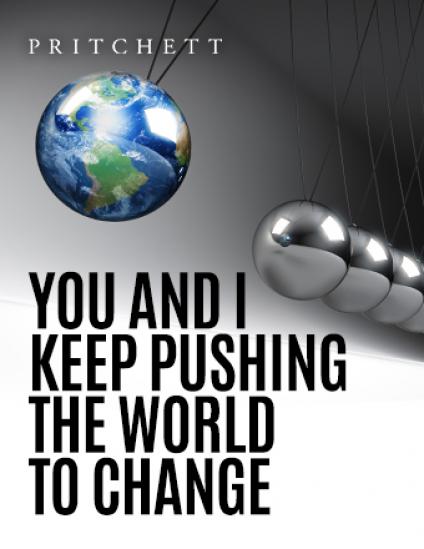 You and I Keep Pushing the World to Change

It is you and I–along with everyone else–who keep pushing the world to change.

As consumers, we get more demanding all the time. We want better quality stuff. We want it faster. And cheaper. Plus, we want more choices to pick from. Whoever comes along that can satisfy all these wants the best gets our business.

That is, until somebody else shows up offering us a still better deal.

Whomever we’re doing business with must be improving constantly, or pretty soon they simply can’t compete. We’re picky. We keep upping the ante. And if somebody who offers us goods or services can’t deliver to our satisfaction, that’s their problem.

Not ours. We have little mercy. You and I refuse to spend our money on inferior things just so a company won’t have to lay off employees. Our purchasing habits aren’t designed to take care of weak organizations. We’re not willing to pay extra to protect other people’s jobs. We just want the best bargain.

Because we’re tough customers, we cause progress. Organizations experiment, innovate and improve things in their fight to win our business. But there’ll always be losers in this competitive struggle. Many companies have to cut back to survive. Some fold their tents and call it quits because you and I no longer want what they have to offer.

Basically, we kill jobs, even as we’re breathing life into entirely new enterprises.

Back in the 1930s, a Czech-born economist named Joseph A. Schumpeter called this process “creative destruction.” Some industries decline and die, even as new ones develop. Younger, more aggressive companies replace the weak ones. Those organizations that fail to adapt fast enough get replaced by more agile competitors who do a better job of satisfying customers. The economy re-creates itself as old jobs give way to new ones.

And the beat goes on—this is the free enterprise system at work.

Modern technology contributes heavily to this job turbulence. Today’s new tools and equipment enable us to work in ways that eliminate the need for a lot of people. These employees are not merely being laid off—their jobs are disappearing for good.

This, of course, looks bad when it hits the headlines. It sounds scary on the evening news. People have the idea that job creation is always good, while anything that destroys jobs is bad. This viewpoint presumes that existing jobs are precious and should always be saved.

As Schumpeter pointed out, economic progress just naturally shakes up the world. Some people lose their jobs. No question, that’s very painful to them and their families. But over the long haul, this process has a positive effect on the economy as a whole. It frees up people in declining industries to produce more and better goods in new areas.

Consider this. In 1900 we had 40 out of every 100 workers busy producing raw food. Today it takes only 2 out of every 100 to feed three times as many Americans. And there’s enough left over to feed several million people in other countries. In spite of this huge drop in farm jobs, our food supply is better than ever. We also spend a much smaller share of family income on food today. As this progress occurred, 38 out of every 100 workers “lost their jobs,” so to speak. But we could look at it another way and say they were set free. As the years went by, they left the farm and found even better work. This migration created millions of new jobs. It also raised our standard of living by leading to all kinds of great new goods and services. For example, automobiles, appliances, better entertainment, computers, medical improvements and so on.

As our world advances, we no longer want or need certain things. Like washboards, eight-track stereo cartridges or slide rules. Like as many blacksmiths, bank tellers or buggy whip makers. We aren’t interested in paying out of our own pockets to keep those products and jobs around. So they disappear.

Just remember, when organizations downsize, restructure, outsource, merge or shut down for good, ordinary people like us probably play a hand in it. We like to blame somebody else, but it could be mostly our fault. As consumers, we force change. We’re not willing to have it any other way.

"In spite of the cost of living, it’s still popular.” –Kathy Norris