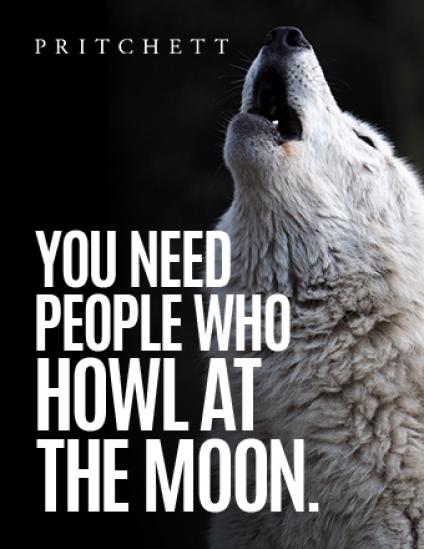 You Need People Who Howl At The Moon

Setting out to change the culture is like taking on an army of secret police. You know the enemy is everywhere, ready to crack down on the people who don’t conform. Cold-blooded and forever watchful, culture cannot tolerate the unconventional. The more eccentric or out of the ordinary someone behaves relative to existing cultural standards, the more ruthless the response.

Sometimes the rebuke is mild—a mere slap on the wrist to get the offender’s attention. But sometimes the reprisal is swift and vicious. Either way, the end result is the same. People whose behavior ranges beyond the traditional cultural boundaries are forced to comply, exiled to the fringes of the organization, or rejected outright. Only a few—usually the strong ones with enough talent to make them precious—are indulged and allowed to remain in the mainstream of the organization. The culture tolerates them out of its own selfish interests, yet still considers them misfits.

Born of the status quo and committed to its defense, culture has many weapons at its disposal. It is engineered to protect itself through various mechanisms that develop over the years— bureaucracy, hiring and promotion practices, the reward system, and plain old peer pressure. The existing culture never hesitates to use its mighty arsenal, even against the innocents who inadvertently step out of line.

Your job is to help break the culture’s stranglehold on behavior. You must legitimize unconventional acts. Encourage employees to operate “outside the dots.” Run interference for the mavericks and renegades, protecting these cultural outlaws from the retaliation that is sure to come. Give them enough running room to prove what a powerful contribution they can make.

The old culture is sitting on vast resources, stifling priceless creativity and innovative energies. Liberate the employees from cultural constraints. Turn their fresh ideas and initiatives loose and aim them straight at the marketplace. Tease out the hidden talents and traits that lie dormant in your people. Bring more of their mighty potential into play.

You cannot achieve culture change without the influence of “deviant” behavior. You need radicals. Rebels. Revolutionaries. People who howl at the moon. Be eccentric yourself, and encourage eccentricity in others.